Toe-Blake Roy was born in a Roman Catholic family in St-Gédéon, Quebec in 1958. In 1970 his family came in contact with the gospel through a weekly radio program. His parents and siblings accepted the Lord shortly after. It wasn’t until 1972, when his father confronted him about his idol- worshipping and challenged him to read Exodus 20, that he made a decision to destroy his idols, confess his sins and give his life to the Lord.

At 16, during a mission’s conference at his home church in Quebec, the Lord called Toe-Blake to full-time service. Knowing this required attending Bible College, Toe-Blake undertook the task of learning English, by moving to Saskatoon, Saskatchewan. He then pursued a Bachelor of Religious Education in Pastoral Studies at Briercrest Bible College; a Masters of Divinity at London Baptist Seminary; a Masters of Theology in Old Testament at Detroit Baptist Theological Seminary and a Masters of Arts: Administrative Studies in higher education and organizational leadership at Briercrest Biblical Seminary.

Toe-Blake married Linda Mathieu, on June 4, 1983 in St-Georges, Quebec. They had four children born between 1984 and 1989, two girls and two boys. The Roys were accepted as missionaries with FEB International in 1991. Their original goal was to serve as church-planters in France. After 2 ½ years of deputation, the Lord shut the door for France and opened the door for the Roys to return to their home province of Quebec to plant a French church in Lachute, Quebec. They moved to Lachute in August 1994. Église Baptiste Évangélique des Laurentides was incorporated in 1997. In 1999, the Lord opened the door for the church to purchase a church building for $1.00 from a group of English Brethren. The church obtained a government grant of $78,500 for the restoration this historical church building. They also raised another $200,000 to build a multipurpose addition to the existing church building. The building was dedicated on August 30th, 2003. As well as pastoring, Toe-Blake is involved in a coaching-mentorship program with pastors-in-training in Lachute. He is teaching satellite courses for the French Seminary in Montreal and enjoys interacting with students. He also gives courses on Stewardship and helps churches with their incorporation process.

In September 2006, Toe-Blake accepted the position of Canada Director for BLF Canada. BLF Canada’s (Bibles and Literature in French) purpose is to glorify God through providing Christian materials to meet the needs of evangelism and discipleship in the French-speaking world.

Donate to the mission work of the Roy family

Zak grew up in a christian family in Western Canada. Jaël is the daughter of BLF Canada director Toe-Blake Roy, and has grown up in Quebec while her family planted a church.

Zak and Jaël met at Briercrest Bible College, where they both graduated with BA’s.

They were married in 2005, and moved to Quebec in 2006.  They now have four children, and are actively involved in their church (Zak as a deacon, and Jael oversees children’s ministries).

Zak serves as the assistant to the director at BLF Canada.  He oversees finances, communications, and office administration.

Donate to the mission work of the Kenney family 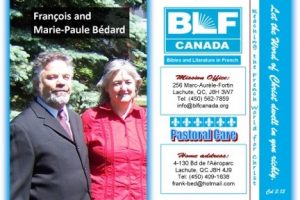 Francois and Marie-Paule Bedard are native Quebecois, and are serving in Lachute Quebec.  They give pastoral care to the BLF Canada staff, as well as assist in the local church.

Donate for the mission work of the Bédard family

Micheline is a native of Quebec, and is fluent in English and French.  After serving with BLF Canada on a short-term mission trip to Haiti, Micheline joined BLF Canada as a full-time missionary.  She has experience as a medical technician, and spends her time between Quebec, Haiti and Togo.

Micheline, in partnership with ABWE, has recently returned from Mango, Togo (a French speaking country in Africa), where she used her medical expertise to train local workers how to operate their new medical laboratory. 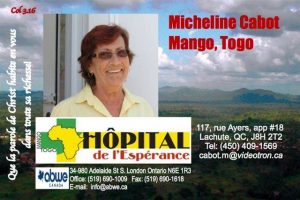